The Impact of UConn Women’s Basketball? 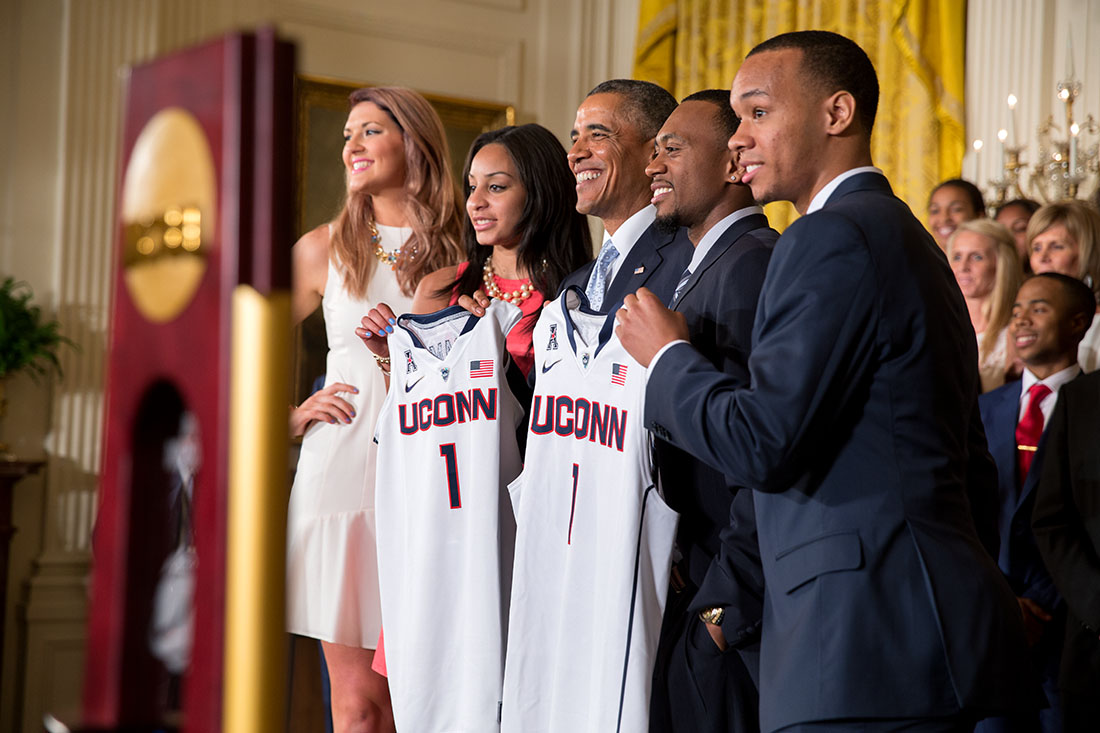 After the University of Connecticut Women’s basketball defeated Saint Francis in the first round of the NCAA tournament, USA Today’s Josh Peter wrote that the team and its coach, Geno Auriemma, who were celebrating their first-round win, should be embarrassed. He concluded his article by stating, “UConn’s win on Saturday was a loss for women’s college basketball.” Although Peter’s article is not the first, and is likely to not be the last time someone critiques the UConn Huskies, I wonder why their sustained excellence continues to be vilified? Critics often state that UConn gets the best players, building super teams that no one can compete with. While it is true that UConn often recruits excellent players, many other schools such as Notre Dame, South Carolina, Mississippi State, Oregon and UCLA also land top-tier talent every year. This is also true of men’s athletics and there are several examples of men’s teams that have achieved such heights and are not viewed as “the beginning of the end” of their sports. Teams such as John Wooden’s UCLA’s basketball team, the Red Auerbach’s Boston Celtics, Wayne Gretztky’s Edmonton Oilers, Bill Walsh’s San Francisco 49ers, and the current Golden State Warriors are lauded for their ability to achieve sustained greatness and for raising the bar of their sport.

“I currently dedicate 10 hours a week at UCLA working for one of the country’s top 10 women’s basketball programs as a manager and have the privilege to witness firsthand what goes into building a culture of accountability and striving to achieve excellence on and off the court.”

One compelling example of a team that exemplifies the excellence and dominance similar to UConn is UCLA’s Men’s basketball program under the coaching of John Wooden. As a freshman at UCLA and avid admirer of Coach Wooden, I find John Wooden’s historic UCLA’s teams that won ten national championships in 11 years to be simply incredible. They dominated the game from 1964-1975, with players like Lew Alcindor (a.k.a. Kareem Abdul Jabar) and Bill Walton bringing UCLA an 88-game win streak, a number of undefeated seasons and seven straight national championships. UCLA was a force to be reckoned for a decade, but they were not seen to be a threat to men’s college basketball? To the contrary, their greatness resulted in other programs elevating their game to another level, which arguably started the incredible growth in the popularity of men’s basketball, which has culminated in what we now affectionately call “March Madness!”

We see this same phenomenon in the NBA when teams play the Golden State Warriors. The Golden State Warriors have an all-star roster, including Steph Curry, Klay Thompson, and Kevin Durant. How could any team expect to defeat, or even just matchup against their elite players? In order to defeat the Warriors, opponents need to bring their absolute best and challenge themselves and the Warriors to compete at a high level. In order for the Rockets to defeat the Warriors in the Conference Finals and stop the Warriors from reaching their goal of winning another championship, they need to find ways to elevate their game. In the example of the Rockets and the Warriors in the 2018 Conference Finals, Harden and Paul, two of the Rockets best players, will need to set the tone for the series early in Game 1 and for their team. Setting a tone of “we’re not going down without a fight,” is what will give the Rockets an edge in this series.

I was six years old when I started to play basketball competitively, but my passion for playing, watching, and coaching the sport has developed over the course of my life. I played competitive basketball for five years, between eighth grade and my senior year of high school and have been coaching basketball skills and fundamentals at camps and clinics for six years. One thing I was told I possessed as a player was a strong work ethic. I was a gym rat, working on improving weak areas of my game and solidifying my strengths because of my passion and love for basketball.

I currently dedicate 10 hours a week at UCLA working for one of the country’s top 10 women’s basketball programs as a manager and have the privilege to witness firsthand what goes into building a culture of accountability and striving to achieve excellence on and off the court. Our coaching staff and players’ preparation is at a fever pitch beginning in the off-season and continuing throughout the season so that we can achieve our goals to win the PAC-12 conference and compete for a national championship. This season, we played a particularly difficult out-of-conference that included a game against UConn. Although I thought it not possible, the team’s focus and effort in preparing for the matchup against UConn at Pauley Pavilion was unlike any other.

Teams like UConn, the elite of the elite, bring out the best in the others. Every opponent UConn faces brings their absolute best, raising not only their bar but also requiring UCONN to continue to raise their own bar. When my UCLA Bruins faced UConn this past November, their hunger and desire to compete to beat the best was palpable. Even though they fell short, that game made it clear how hard they would need to work throughout the remainder of the season if they wanted to meet their goals. Both UConn and Golden State’s elite playing styles provide evidence of the following: at its heart, competition and the challenge to be the best is precisely what athletics is about. We compete with and challenge the best in the game to become the best.

“To the contrary, their greatness resulted in other programs elevating their game to another level.”

Commitment and sacrifice are necessary to achieve sustained excellence like UConn has for more than 30 years. Like the old adage goes “If it was easy, everyone would do it!”. The commitment to excellence by any player, team, or coach needs to be embedded in the culture from the top down and be lived each and every day. Excellence starts with the tone set by its leaders and for UConn it begins and ends with Head Coach, Geno Auriemma and Associate Head Coach, Chris Daley who have guided the UConn juggernaut for over 34 years. Coach Auriemma and Daley have created a culture of accountability and set high expectations for themselves and the team. Not everyone is comfortable doing this as for some, if you set lefty goals and do not achieve them, you have failed. This culture of excellence and accountability is one I have admired since I started playing basketball in sixth grade. I always dreamed of being elite enough to play at UCONN and for Coach Auriemma and Daley because of what believed they stood for and their program’s ideals are what I was taught to hold myself to by my coaches. No doubt the road to greatness is covered in setbacks and disappointment. And it takes much more than having great players. Every great team has great talent but every team with great talent is not great!

We have all loved to hate those that rise to the top in their field at one point or another. The nature of athletic competition is that someone wins, and someone loses, however, by competing, it is undeniable that the best always brings out the best in others. Sustained greatness, such as that achieved by UCONN, is one of the most important catalyst in generating public interest in women’s basketball. Perhaps it will facilitate taking the sport to new heights.

Each month, one of our interns will choose their assignment. Our mission is to connect our girl athletes to experienced ones, to tell the stories of our women’s sports community, and to inspire her own voice. Interested in joining our Editorial Internship Program in the fall? Send a brief letter of interest to awesomesportsproject@gmail.com by October10, 2018.